A long time ago in a life like no other. JD and bomb-laden F-100D, Tuy Hoa AB, Vietnam 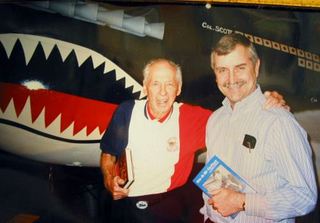 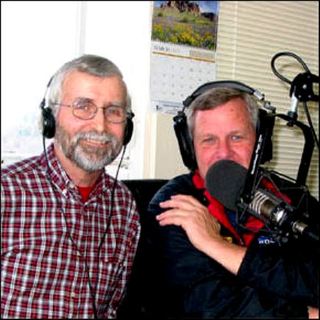 JD and Ken Bagwell, host of Heads Up America Radio

In 1968-69, he flew 268 combat missions in an F-100 in Vietnam and was awarded two Distinguished Flying Crosses, fourteen Air Medals, and the Vietnamese Cross of Gallantry. He was Top Gun in every fighter squadron in which he served in the USAF.

Since mid-1998, JD has addressed audiences in all walks of life in all parts of the country, including the Sons and Daughters of the American Revolution, business, civic and professional groups and conventions, church groups, military groups—active duty and retired—and radio and TV audiences. His motivational messages cover politics, current affairs, business, history, ethics, patriotic themes and "eternal truths."

Twenty-five random (and mostly superfluous) things about me,
originally posted at facebook:

1. I went to a one room country school house and was the only kid in my class all 8 years.
2. Our family did not have indoor plumbing until I was fourteen.
3. I have a bifid uvula . Don’t you wish you did?
4. When I played high school football (quarterback), Mom could holler louder than anyone else in the stands and I could hear her.
5. When I get to heaven, I expect to find Mom singing first soprano in the church eternal.
6. Mom died in ’99, but when we sing her favorite hymns in church, I can still hear her voice. I usually cry.
7. Dad couldn’t carry a tune in a bucket but he sang hymns with gusto anyway.
8. He had a unique way of walking—one stride was a little longer than the other. I inherited it, and then my daughter Lizz inherited it. Sorry, Lizz.
9. As a young fighter pilot in Vietnam, I learned by experience that adrenalin is a manifestation of God’s grace allowing the body to function while the brain is paralyzed with fear.
10. More than once I felt my F-100 respond in life-saving ways that had nothing to do with my inputs on stick and rudder.
11. As a 54-year-old civilian I got upside down in an F-16 and a B-1 bomber.
12. I grew up in a church built by my grandfather and friends. It still exists.
13. I have 45 minutes of freefall time…in 106 parachute jumps as a skydiver in college.
14. My uncle declared I wouldn’t live to see 25. Wrong by 46 years, so far.
15. The (Ent) Air Force Base Chapel in Colorado Springs, where Karen and I were married 48 years ago, did not survive the wrecking ball, but our marriage thrives…by grace alone.
16. At about 5 years of age, I drove a team of draft horses. Later I learned it was the funny sound coming out of Dad’s mouth that was controlling the horses. The Holy Spirit works in a similar way.
17. One of those draft horses was named Jerry (Jeff and Jerry). I never had the nerve to ask my parents if that horse was my namesake.
18. At about the age of ten I learned that it was absolutely critical, on a cold winter morning on the farm in Illinois, to breathe on your cupped hands before you begin to milk a Holstein cow.
19. During the cold war I sat nuclear alert with a hydrogen bomb and enough fuel to deliver the weapon and escape the fireball before the engine flamed out.
20. The older I get the more amazing grace is.
21. The Apostle Paul and I hung out in the same part of Turkey (see #19). He did infinitely more good for the Kingdom than I have.
22. I spent a lot of time half way up in 2 World Trade Center, my company’s home office, looking down on the magnificent Statue of Liberty in New York Harbor, before it collapsed in a fiery inferno.
23. For too much of my life I aspired to be an eccentric millionaire. I’ve achieved the first half that goal and now I wonder why I thought the other half was so important.
24. Appearances notwithstanding, and contrary to what our kids thought growing up, I did NOT fly top cover at the crucifixion.
25. I’d been calling myself a Christian for 30 years when I was introduced to reformed theology. It was like turning on 1000 fluorescent lights in a dark cave.

Teaching from my book, NO ONE..., to 500+ summer campers, aged 8-18 at Ridge Haven Camp and Conference Center, NC, was one of the greatest blessings of my preaching/teaching/speaking/writing life.